1-844-970-4269
Contact Us
Top 5 Parts That changed
BMX Forever
BMX is evolving and has been since its inception in the late 60s and early 70s. Materials have changed, geometry has changed, and new parts have been created. In this article we’re breaking down the top 5 parts (in Mike’s opinion) that changed BMX forever. 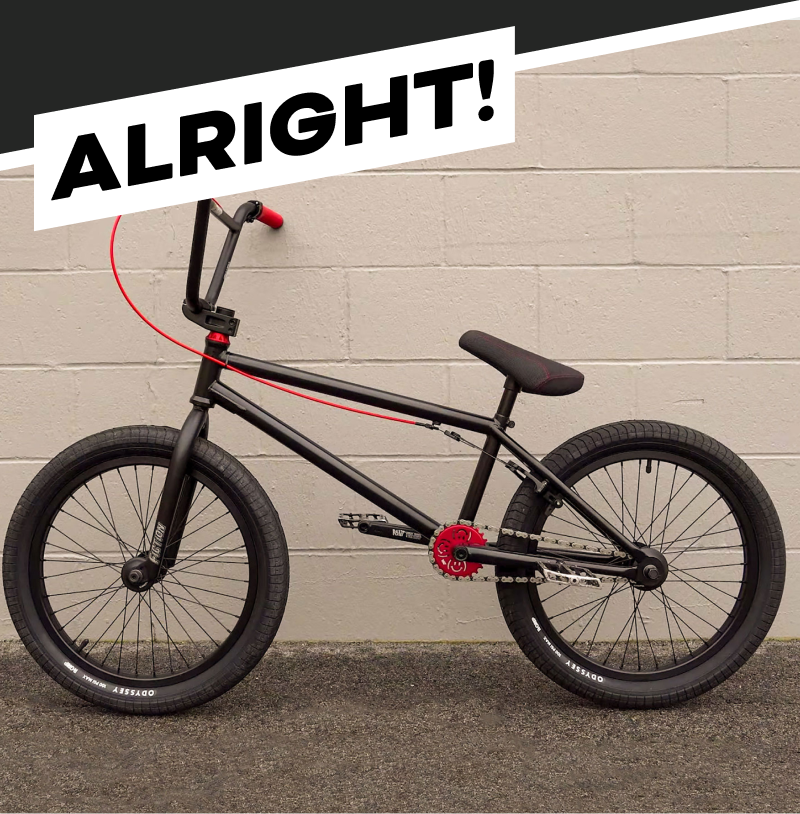 So starting off I just want to say this is my Top 5 based on my years of riding and your list could be similar or wildly different.

#5 - Freecoaster Hub
Starting off at #5 is the ever-popular freecoaster hub. Freecoasters originally started with coaster brake hubs. You know those hubs that slow you down when you start to back pedal? Well guys started removing the brake mechanism inside and this allowed them to do fakies without having to backpedal. As time went on this concept evolved into the modern day freecoaster. 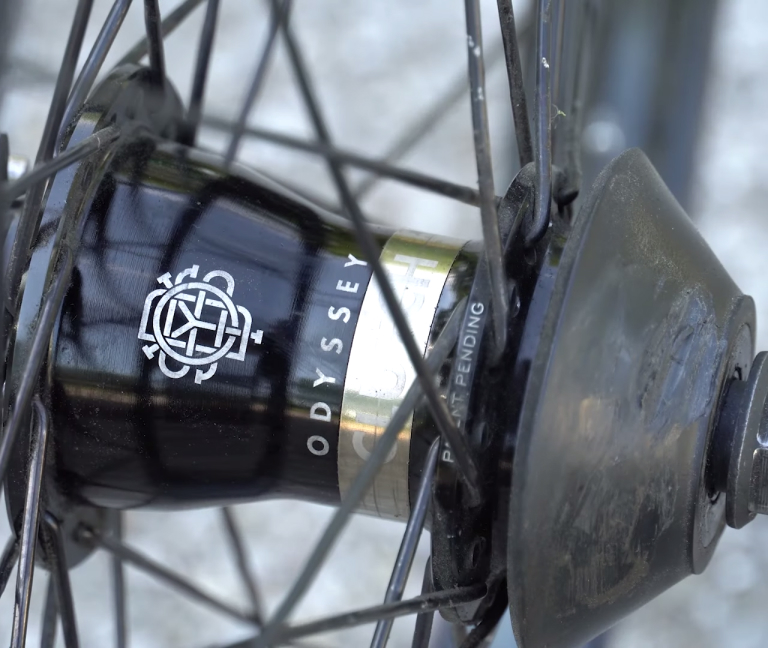 Freecoasters used to have a bad reputation for being unreliable. I will say they are still not quite as reliable as a cassette hub, but they’ve improved leaps and bounds over the years. Many years ago, only flatlanders rode freecoasters, then you had guys like Bruce Crisman and Ian Schwartz that really started pushing freecoaster riding on the street. Over the years freecoasters have blown up in popularity and for good reason. Now just about every other pro rider has a freecoaster and it’s crazy to see how far they’ve come.

I tend to switch back and forth from a freecoaster to cassette and have tried about every style of freecoaster out there (perks of the jobs), but I have yet to try the planetary clutch system used in the BSD Revolution and other similar hubs. I’m curious how those feel because every design has their pros and cons. Is the BSD Revolution an actual revolution? I guess we’ll find out in the coming years.

#4 - Smaller gears
Coming in at #4 on my personal list: smaller gearing. By smaller gearing I mean sprockets 30 tooth or less and drivers 11 tooth or less. I personally have a 27/9 gearing, but 25/9 is the most common gearing for freestyle bikes these days. A far cry from the 44/16T gearing everyone used to rock decades ago. 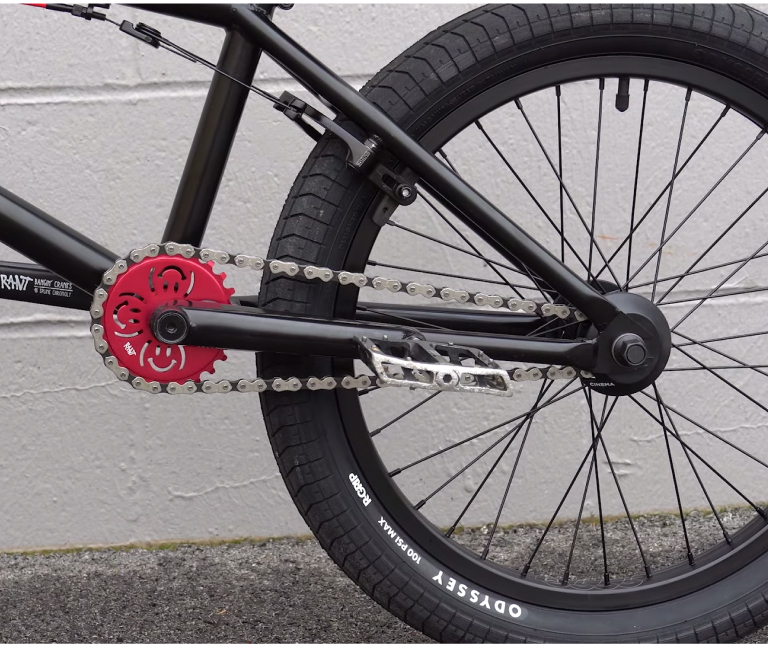 With smaller gearing not only are you drastically reducing weight, but smaller sprockets give you more room to work with and you are less likely to bash it on things, especially during grinds. Many people are riding 4 pegs these days and having that extra grind clearance for things like crooked grinds and crank arm grinds really helps. Obviously, you can still do those with 44/16 gearing, people have been doing it for years, but it’s nice to have the extra room. And while some people may disagree with this, it looks so much cleaner than having a giant dinner plate sized sprocket bolted to your bike.

#3 - Pivotal seats
For my #3 spot I’m going with the Pivotal seat. Pivotal seats were first introduced by MacNeil in the mid 2000s. Since then, they’ve completely taken off to where nearly every BMX company has their own version of a Pivotal seat. Even mountain bikes have adopted Pivotal so you know it’s here to stay. Before Pivotal we had railed seats which were fine, but a bit more complicated trying to line up the seat guts. 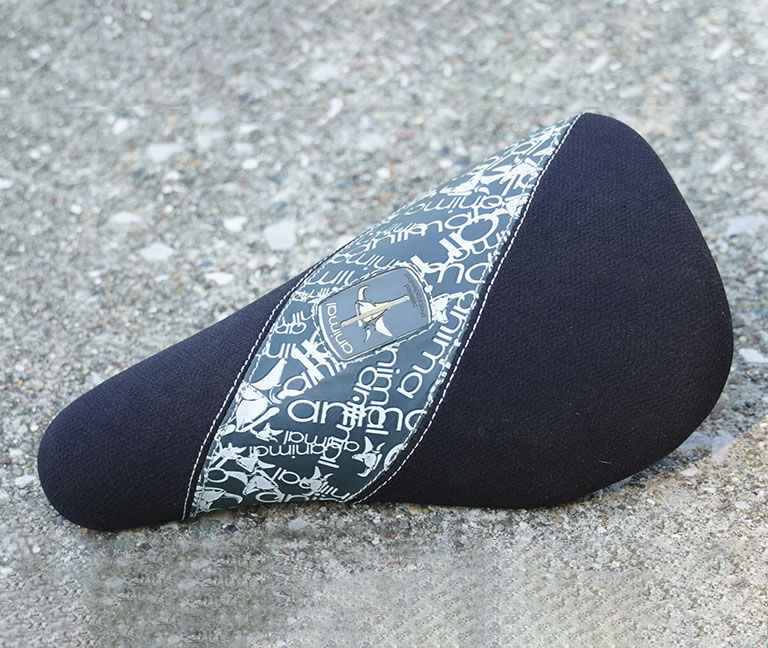 They were also heavier than a standard Pivotal seat and post combo. With Pivotal it’s a one bolt solution that’s simple, lightweight and strong. Now there are a couple down sides to Pivotal. For one you don’t get the forward and back adjustment like you do a railed seat.

At one point Alienation did have the Alienation Slider Pivotal which allowed for forward and back adjustment. It didn’t really take off so you’re stuck with only having up and down adjustment. Most people do not see this as a huge deal. The same can be said for the Pivotal access patch on top. Some riders just do not like the look of this, but that has been resolved with Kink’s Stealth Pivotal seat system. It works very similar to a traditional Pivotal seat, but the bolt is accessed from the bottom. If you’re somebody who just hates the look of a Pivotal access patch, the Stealth Pivotal is the way to go.

#2 - Integrated headsets
Coming in at #2 on the list is the integrated headsets. The integrated headset was a game changer, especially when you think about what it replaced and that’s the standard press-fit headset. If you’ve ever installed a standard headset what you’re supposed to use is a cup press. But let’s be honest, who used a cup press? What you used was a hammer and a block of wood to hammer the cups in place. It was a pain and sometimes the cups would start to go in crooked, not to mention the issue with broken cups… 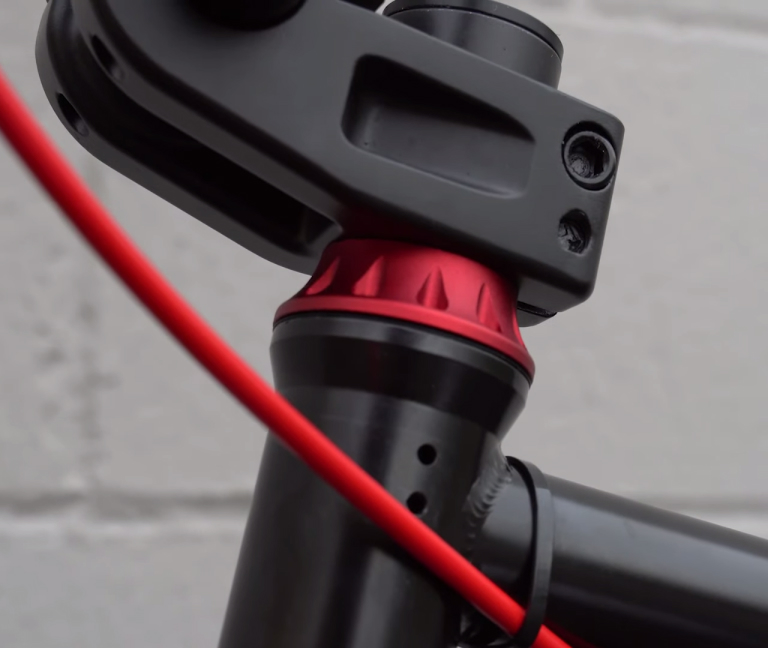 With an integrated headset the bearings drop right in place and you’re pretty much good to go. Standard headsets are still around and will be for many years to come. These days, however, they are typically found on entry level completes where cost is an issue and aluminum race frames due to material constraints.

Within freestyle BMX the integrated headset has completely taken over and for good reason. They’re simple, easy to install, and overall a lot less weight as well. For these reasons I feel it deserves the number 2 spot.

Honorable Mentions
Before I get to the #1 pick, I want to give you a couple honorable mentions that just missed my list, but they may be on yours. The first one being the Mid BB. Mid replaced the American BB which consisted of bearing that was pressed inside a cup, and that cup was then pressed into your frame. The brand FBM really pushed the idea of the Mid BB forward. Make the frame’s bottom bracket shell smaller, take the bearing out of the cup, and press that bearing directly into the frame. 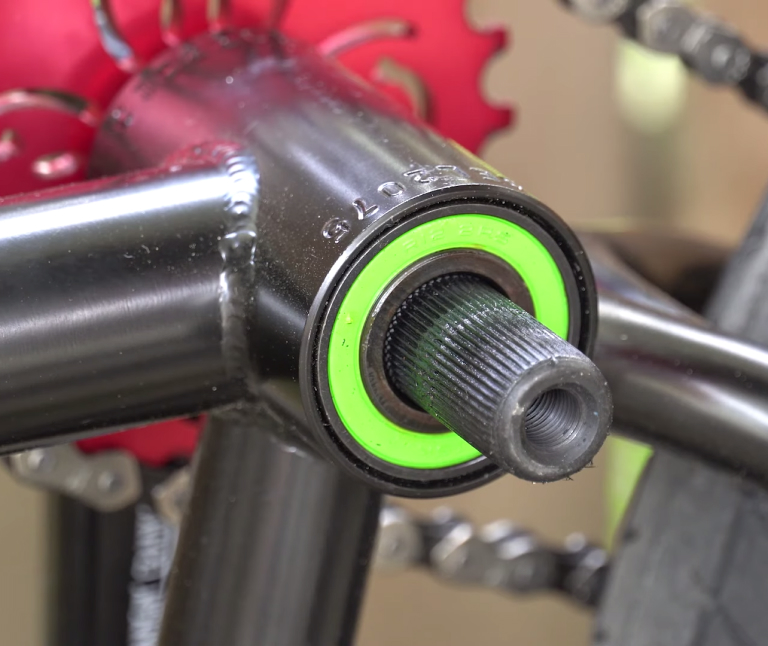 It’s a simple and cost-effective solution to the overweight American BB and proved to be just as strong. Another honorable mention – the half link chain.

Shop Mid Bottom Bracket
Originally developed in the mid 2000s by The Shadow Conspiracy and their original Interlock chain, now everyone makes their own version of a half link chain. Half link chains allow you to fine tune the rear end length to exactly where you want the rear wheel sitting in the dropouts. This is especially useful on frames with extra short dropouts or if you’re running a not-so-common gearing like a 26 or 27T. 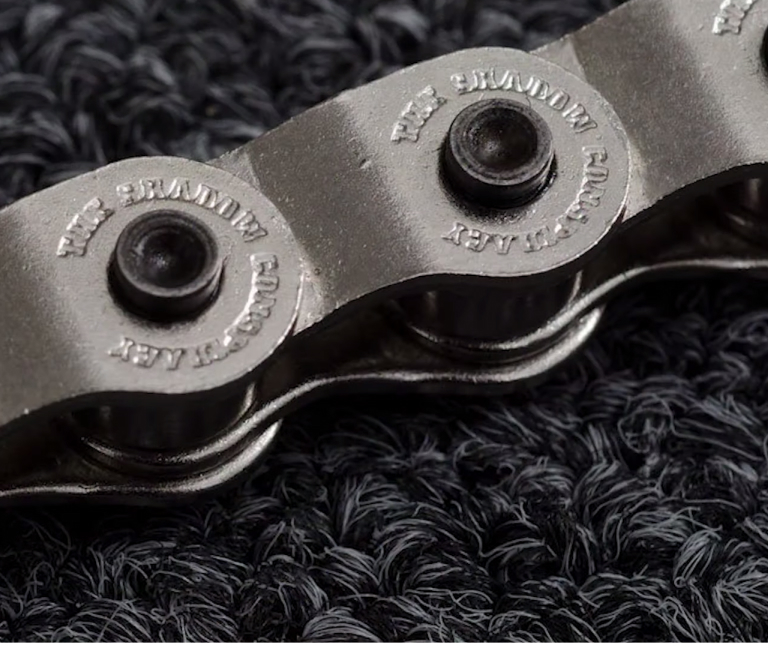 Definitely worth an honorable due to how popular half link chains have become. 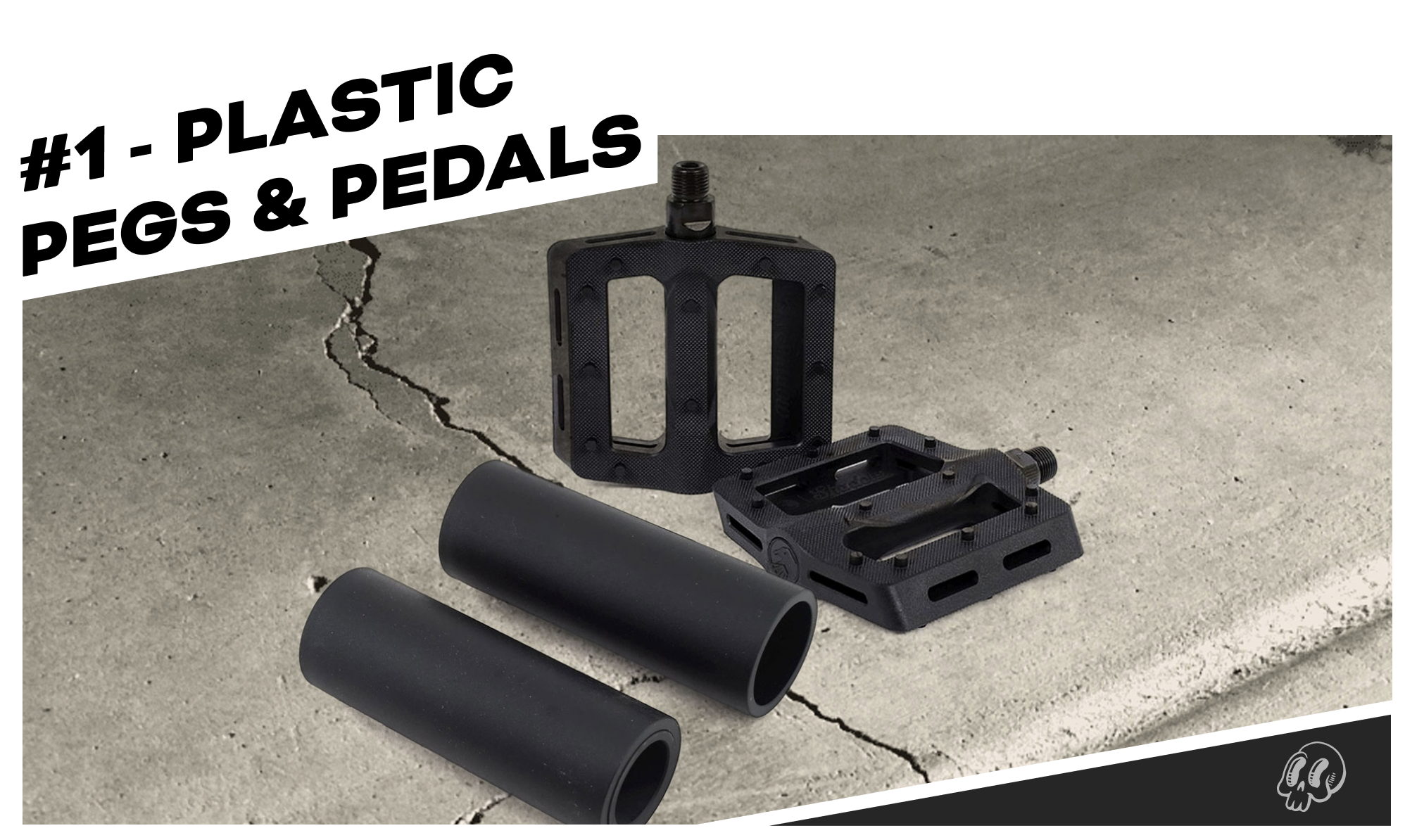 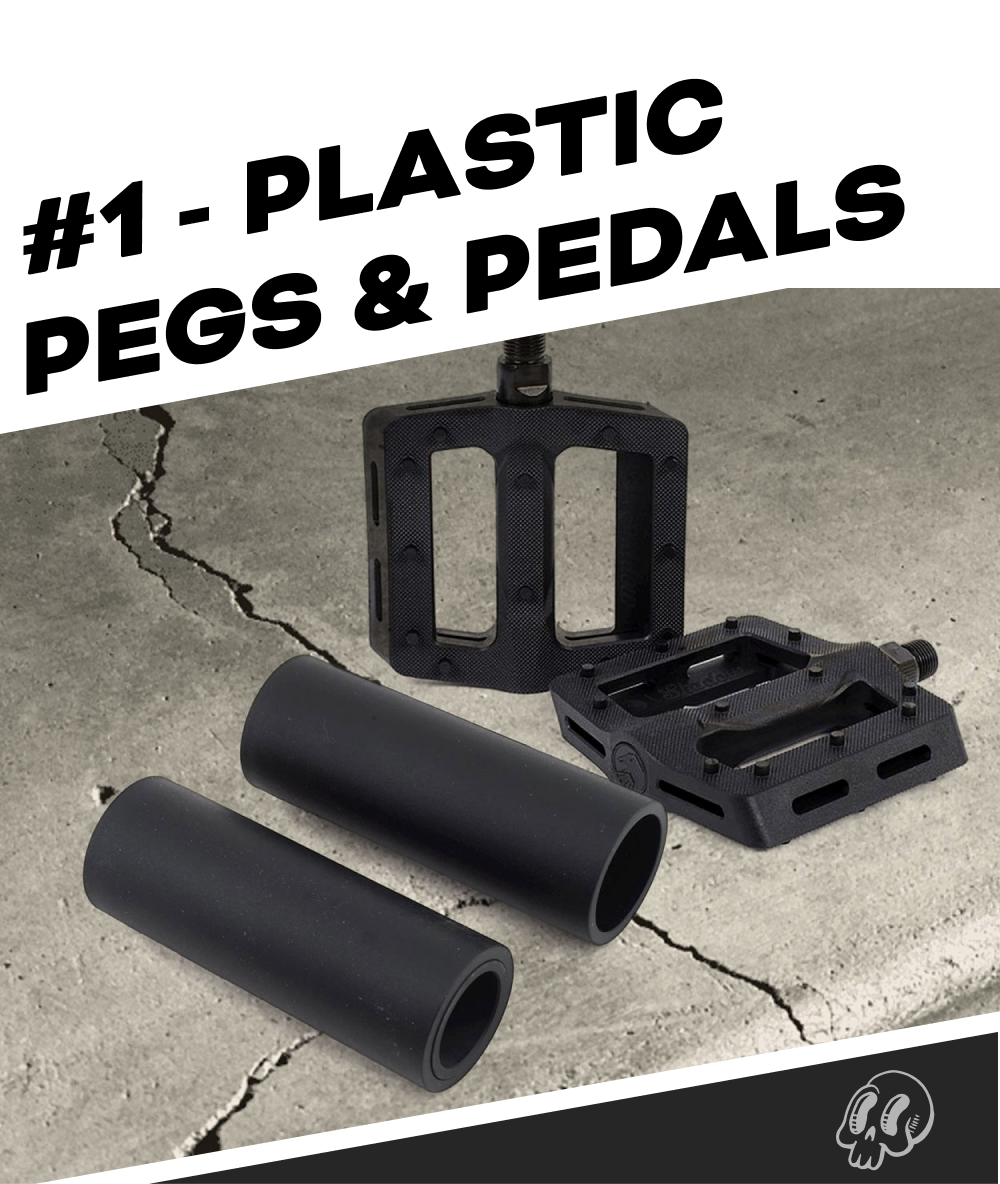 Alright so we’ve finally come down to the number 1 pick and this may be controversial for some, but I think there’s no denying how much of a game changer this was in BMX. It’s a bit of a “two for one” and that’s plastic pedals and plastic pegs. That’s right, plastic in BMX.

When riders first heard the word plastic there was some hesitation; I know there was for me. My first thought was those cheap department store brand bikes where the plastic pedals would explode upon impact. Luckily, that’s not the case here. These days the plastic used by major BMX brands have their own mixture of nylon, polycarbonate, fiberglass or some other proprietary material blend that increases strength and extends the life of the part. Most riders will never have an issue.
The Odyssey Twisted PC pedals were probably the first plastic pedal that really took off and changed the way people thought of plastic in BMX. They were strong, affordable, they gripped your feet and they lasted much longer than people expected. Around this same time, plastic pegs started to take off. The original plastic pegs were huge, they slipped in your dropouts, wore out way too fast and broke easily.

The plastic pegs you see now have full aluminum or chromoly cores, and the outer sleeves can be replaced once worn. The advantage of plastic pegs being they slide well on nearly every surface. If you don’t believe me, try grinding an aluminum handrail with plastic pegs and then switch them out to chromoly and hope you don’t go over the bars…

Plastic just slides better, especially if the surface is waxed. Now, I get it… Steel is real and nothing beats the sound of a metal peg griding a metal rail, but if for some reason you have never tried a plastic peg, you may be surprised just how well they work. The downside being they do wear out and need to be rotated from time to time, or just all out replaced.